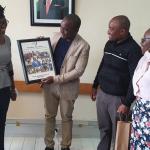 DMG incorporates Destiny Media, Destiny Events, NewZim TV, and NewZimbabwe.com with operations in both the United Kingdom and Zimbabwe.

Nyambabvu was the director of digital and TV services at the public broadcaster.

He left ZBC a year after he was unexpectedly shunted out of his previous job as the head of news and current affairs. Speaking to ZimLive, Nyambabvu said:

I always meant to do between two and three years at the national broadcaster and then move on because I take the view that public service is a shared responsibility and no single individual can have all the answers.

… You can’t learn from four CEOs in just under three years; the corporation is unique like that.

I’m proud of one small but in my view hugely impactive initiative – we launched Ndebele for beginners lessons on the ZBC YouTube channel; a contribution to addressing one of the mischiefs of our country’s history.

Nyambabvu returns to DMG after previously serving as NewZimbabwe.com editor before joining ZBC. DMG executive chairman Jeff Madzingo had this to say:

He brings with him a wealth of experience required to make the group highly competitive in the ever-changing media industry.

Nyambabvu (46), has worked in the media industry for over 25 years across print, broadcast, and digital media production.

Nyambabvu is currently studying for a Master of Business Administration (MBA) with the University of Zimbabwe.