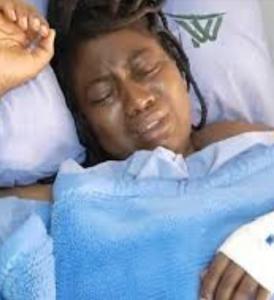 Ziyambi made the remarks while presenting a statement during the country’s third cycle universal periodic review before the president of the Human Rights Council in Geneva.

He said Mamombe and her friends, Cecilia Chimbiri and Netsai Marova, formerly famously known as the MDC Alliance trio, were liars.

Ziyambi said their alleged forced disappearance does not fall under that category but could pass for an alleged abduction. He said:

This case was extensively investigated by the Zimbabwe Republic Police. The resultant police report revealed that their allegations were false and that they had staged the abductions in a bid to tarnish the image of the Government.

Consequently, they were charged and arraigned before the courts. Since the commencement of the court proceedings the three women have employed dilatory tactics to evade trial including faking mental health illness. One of them has since absconded to Europe and a warrant of arrest has since been issued against her. The remaining two have been granted bail and are currently out of custody.

If this matter is proved, it could perhaps assist to lessen the number of false abduction and disappearance claims levelled against the government which normally coincide with important international events.

Mamombe and her friends are accused of faking an abduction to soil the government’s reputation, publishing falsehoods and also breaching COVID-19 regulations among other allegations.

BUSH LAWYER you need to understand one thing my friend,
" THE RESULTANT police report found that they had facked their abduction - this does not require the court outcome on a case like that
"FACKED MENTAL ILLNESS"- this too does not require the courts rather the Medical Practitions which in this case rulled out the mental illness though such a case can not be rulled out at the time when,the alleged crime.

This is why I will never feel merciful for anyone who's been Zanu even at their worst relationship with their former friends.Look at Mary Mubaiwa now,Chombo etc.The minister should know that one day he will need the public and it's only the public that can save him.Time is the greatest answer to everyone and everything.

THEY WERE LATER CHARGED ALLEGEDLLY FOR FAKING ABDUCTION. THEIR CASE IS STILL TO BE FINALISED BY THE COURT.

JUSTICE, LEGAL AND PARLIAMENTARY AFFAIRS MINISTER ZIYAMBI ZIYAMBI SHOULD NOT HAVE STATED AUTHORITATIVELY THAT THE TRIO FAKED ABDUCTION AND THAT JOANA FAKED MENTAL ILLNESS BECAUSE THE COURTS HAVE NOT YET FOUND THEM GUILTY OF FAKING ABDUCTION.

IF JOANA MAMOMBE WAS EXAMINED BY TWO PSYCHIATRISTS WHO CERTIFIED THAT SHE WAS UNFIT TO STAND TRIAL, IT WAS WRONG AGAIN FOR THE MINISTER TO CONTRADICT PSYCHIATRISTS. HE IS A LAWYER. HE IS NOT A QUALIFIED MEDICAL DOCTOR.

MINISTER ZIYAMBI ZIYAMBI SHOULD LET THE COURTS DO THEIR WORK.

Ziyambi, you took an oath but now you are doing the opposite. You truly know what happened to the trio but you choose to blame them. Be human. Deno vari vana vako unonzwa sei?
NYARAIWO KUNYEBA PAMBERI PESANGANO REPASI ROSE.