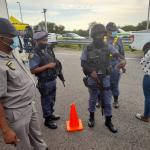 According to SABC, undocumented immigrants claimed that they each paid the driver R1 500 to transport them to Johannesburg.

SAPS also arrested the driver for bribery after he allegedly offered the law enforcement a certain amount for them to be allowed to go through. SAPS posted on Twitter:

#sapsGP 14 illegal immigrants travelling from Zimbabwe to Gauteng were arrested by Gauteng police during operation #OkaeMolao. The driver was also arrested for bribery after he offered law enforcement officials an amount of money for them to be allowed to go through. ML

Motsoaledi claimed that South Africa border security authorities told him that Zimbabwean soldiers were receiving bribes from border jumpers to allow them into the neighbouring country.

An SANDF officer told Motsoaledi that they had communicated with the Zimbabwean army commanders about the issue of corrupt soldiers but apparently nothing was done to address it.

It goes with some luck ...e same guys who refused bribed,if they get searched you wil be shocked...