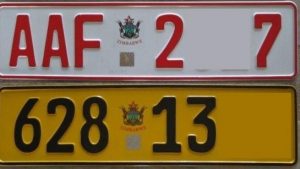 National police spokesperson, Assistant Commissioner Paul Nyathi has issued an update on the operation targeting plateless, unregistered, and unlicensed vehicles. He said over 5 800 motorists have been accounted for since the launch of the ongoing operation. Pindula News presents Nyathi’s statement:

Reference is made to the ongoing Police Operation on unregistered and plateless vehicles in terms of the Vehicle Registration and Licensing Act, Chapter 13:14.

Since the onset of the operation on 15th January 2022, a total of 5841 motorists have been accounted for. The Zimbabwe Republic Police applauds the public for the cooperation which has been received by officers throughout the country in enforcing the law and bringing sanity on the country’s roads.

The public is reminded that the Ministry of Transport and Infrastructural Development has made it clear that there are adequate stocks of number plates in the country and no vehicle should be on the road without number plates.

The Zimbabwe Republic Police, therefore, reiterates that all vehicles not displaying permanent number plates should be parked whilst awaiting the necessary registration process. It is a fact that Police investigations have shown that vehicles with no registration plates are being used to commit robbery, murder, rape, kidnapping, Unlawful Entry as well as hit and run road traffic accidents in the country.

The public is also strongly urged to change ownership of vehicles they purchase from local people within 14 days as prescribed, as failure to do so is an offense. It becomes difficult for Police to identify current owners of vehicles through number plates when ownership of a particular vehicle is not up to date.

Above all, some of the vehicles are not insured in terms of the Road Traffic Act Chapter 13:11 which poses a danger to the Government’s road safety efforts and security of travellers.

everything on the road must be platted even buses need identity

I HAVE ALREADY PATTED POLICE ON THEIR SHOULDERS FOR TARGETING UNLICENCED, UNREGISTERED AND NUMBERLESS VEHICLES. SOME OF THESE VEHICLES ARE USED TO COMMIT CRIMES.

THANK YOU FOR YOUR UPDATES, BUT YOU ARE NOT TELLING US, THE PUBLIC, HOW MANY HARD CORE CRIMINALS YOU HAVE NETTED AS A RESULT OF THIS OPERATION. IT IS IMPORTANT ASSISTANT COMMISSIONER NYATHI. PLEASE GIVE THE PUBLIC THOSE STATISTICS IN YOUR NEXT BRIEFING.

Be consistent with your law,zupco buses do not have plates,eish