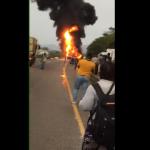 The Zimbabwe Republic Police informs the nation that the following road traffic accident statistics were recorded from 15th-27th December 2021 compared to the same period in 2020.

On Boxing Day, 26th December 2021, 59 road traffic accidents were recorded countrywide of which 10 were fatal, killing 12 people while 25 were injured.

In 2020, 61 road traffic accidents were recorded which include five (5) fatal which killed five (5) people and injured 45 others.

Most of the road traffic accidents occurred on highways as a result of speeding, inattention, misjudgement, following too close and recklessness on the part of drivers.

The Zimbabwe Republic Police urges drivers to be cautious and promote road safety on the roads this holiday.

We remind drivers that road safety is a collective responsibility that needs the cooperation of all motorists.