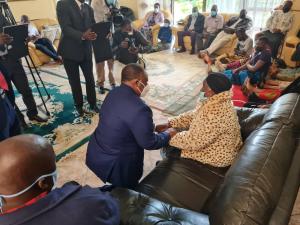 It was with a deep sense of shock and grief that I learnt of the untimely demise on Wednesday afternoon of the late Cde Jetro Dauramanzi, at Parirenyatwa Hospital, following a short illness.

Born on 15th April 1931, the late Cde Dauramanzi belongs to the early crop of our nationalists who pioneered our early resistance and struggles against colonialism and imperialism.

As a senior member of ZAPU then, and like many of his colleagues in the struggle for our national Independence, he too endured long periods in jail and detention centres for supporting our armed liberation struggle.

He was persecuted by the Rhodesians for the role he played in organising African Trade Unionism and political activism.

As the armed liberation struggle intensified, so were his heroic efforts at mobilising material resources for our freedom fighters as well as for the welfare of the families they had left behind.

After our Independence in 1980, the late nationalist continued his political journey as a member of the Central Committee of the then ZAPU and has been a member of the National Consultative Assembly of the ruling party, ZANU PF, since the merger of PF ZAPU and ZANU PF following the Unity Accord of 1987.

In spite of the persecution he went through, Cde Dauramanzi remained a loyal and patriotic citizen of our motherland, Zimbabwe.

He was a true revolutionary cadre who shall sorely be missed by all of us who had the privilege of working closely with him and many others whose lives he touched in so many different ways.

On behalf of His Excellency the President, Dr E D Mnangagwa, our Nation, and my own behalf, I wish to express my heartfelt condolences to the Dauramanzi family, especially to his wife, Gogo Oripa and the children, who have lost a beloved husband, father and mentor.

May they derive solace from the rich legacy he has left behind, and be comforted by the knowledge that the nation grieves with them.

Following consultations with His Excellency the President, Dr E D Mnangagwa, the late Jetro Dauramanzi, will be granted a State-assisted funeral.

May his soul rest in eternal peace.

He is not sure of his identity.