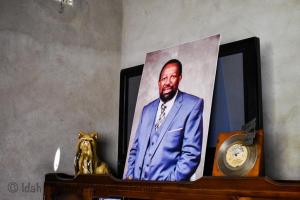 I learnt with profound shock and deep grief of the death yesterday of legendary musician and artist, Cde Zexie Manatsa, who passed on at Parirenyatwa Group of Hospitals after succumbing to cancer.

His untimely demise leaves a deep chasm that will be very difficult to fill, not only for the Manatsa family which birthed him but also for our Nation which has lost a great patriot-artist

Zex remains an iconic figure in the music industry whose music career dates back to the colonial days and peaking at the height of our armed liberation struggle.

He contributed immensely to the struggle for our country’s Independence through satirical, poetic compositions. Songs such as “Baba Tipeiwo Ndege,” “Musango Mune Hangaiwa”, Ndarota Ndina Mai”, among others immediately come to mind.

Singing at a time when the Rhodesian settler regime was committing horrendous atrocities against our people in order to preserve and perpetuate its minority rule, Zex used his musical talent and composition skills to revolutionary effect as he deployed different music styles such as township music, JITI, Simanje Manje and gospel to articulate national issues of the day.

His songs were always pregnant with messages aimed at inspiring others to focus on the greater good for our society and our great country.

Similarly, he was averse to both political and religious prostitution and encouraged our people to be patriotic and morally upright.

It will be recalled that his contribution during the liberation struggle was recognized when he was picked as part of the group of our local musicians to play alongside the legendary Reggae artist, Bob Marley, at Rufaro Stadium, at Independence in 1980.

The name Zexie Manatsa occupies pride of space in the annals of our national music industry and will always be remembered for his generosity of heart and givenness to mentorship and support of aspiring young musicians, including many successful top Zimbabwean musicians we have today.

Together with his famed musical band, significantly named the Green Arrows, Zex released many songs which have proved to be all-time hits such as Chipo Chiroorwa, Vaparidzi Vawanda, Tiyi Hobvu, among others.

In the passing of Zexie Manatsa, our country has lost a humble, devout Christian and pastor who will be greatly missed by many of us who knew him from way back in the ’60s and 70s.

On behalf of His Excellency the President, Dr E D Mnangagwa, our Nation, the arts industry, and my own behalf, I wish to express my heartfelt condolences to the Manatsa family, especially to his wife and children who have lost a beloved husband, father and mentor.

May they derive comfort from the knowledge that the Nation shares deeply their great loss, which is our loss together.

May his dear soul rest in eternal peace.

I COMMEND THE ACTING PRESIDENT, VICE PRESIDENT CHIWENGA, FOR ACKNOWLEDGING ZEXIE MANATSA AS A LEGENDARY MUSICIAN WHO ENCOURAGED WAR FIGHTERS TO FORGE AHEAD WITH THE WAR.

THIS WAS CONTRARY TO HIS FAMILY'S STATEMENT IN WHICH THEY DOWN PLAYED HIS MUSIC HEROICS. ZEXIE WAS A PAR EXCELLENT ARTIST.

{ ONCE MORE I WANT TO COMMEND THE ACTING PRESIDENT, VICE PRESIDENT CHIWENGA, FOR ACKNOWLEDGING ZEXIE'S CONTRIBUTIONS TO THE WAR OF LIBERATION. }