Fuel Depot Manager Vanishes With US$38 000 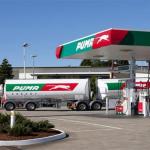 A depot manager with Puma Energy in Harare is on the run after he allegedly broke into a company safe and took US$38 000 before vanishing.

I can confirm receiving a report of theft in which a suspect known as Dingani Zhou was employed by Puma service station is believed to have vanished with more than 38 thousand USD.

ZTN reported sources as saying Zhou also went away with a yet to be quantified amount of money he had collected from other fuel dealers. Said the source:

There are a lot of people who lost their money to Dingani. He even gave other dealers his personal account where money was deposited on the pretext that he would deliver fuel to those dealers but he vanished.

The crime only came to light on Thursday last week when the suspect did not report for duty, prompting the company to make a police report.

Zhou was running the Puma Kuwadzana depot as the manager and would also get money from other registered dealers for fuel deliveries.

Inspector Mwanza requested members of the public to assist police with information that could lead to the arrest of the suspect.

wish him the best...