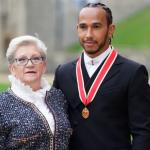 Formula 1 champion Lewis Hamilton has been knighted in a New Year Honours list which salutes hundreds of people for their work in the Covid pandemic.

Three other F1 drivers have been knighted: Jack Brabham, Stirling Moss and Jackie Stewart. Hamilton is the first to be awarded while still competing in the sport.

Hamilton, who took his seventh title in November, is on the list with actress Sheila Hancock, who is made a dame.

But it is the response to coronavirus which dominates, and an MBE for charity volunteer Anne Baker, 106, makes her the oldest ever recipient of the honour.

Mrs Baker, from Salisbury, who has been involved with fundraising for the NSPCC since the 1950s, said it was a “great surprise and great honour” to be recognised.

Ruth Saunders, aged 104, becomes an MBE for services to charity during Covid after walking a marathon to raise money for Thames Valley Air Ambulance this year.

The same honour goes to airline pilot Emma Henderson, from Moray, who set up a first-class lounge experience in more than 80 hospitals across the UK for NHS staff.

There is an MBE for Mark Owen, from Clwyd, after he re-joined North Wales Police to support volunteer officers with tasks including delivering prescriptions and food parcels, and a British Empire Medal (BEM) for Catherine Fitzsimmons from Greater Manchester, a former palliative care nurse who came out of retirement.

Prime Minister Boris Johnson said in a year when so many have made sacrifices, the list was a “welcome reminder of the strength of human spirit, and of what can be achieved through courage and compassion”.

Lewis Hamilton’s knighthood comes after he equalled Michael Schumacher’s title record and was voted BBC Sports Personality of the Year for a second time.

The 35-year-old was made an MBE in 2008 after winning his first F1 championship but was reportedly overlooked previously amid questions about his tax arrangements.

Congrats home boy on yr kinghthood, your next F1 podium will make you the GOAT in F1 history as you surpass Michael Shumacher