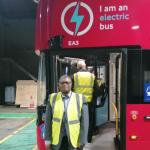 A Zimbabwean engineer, Irvine Nyamapfene has led the groundbreaking project that created the first electric buses in London, the United Kingdom (UK).

This is his second winning project after another award from the CrossRail company where he won the project manager of the year award.

Congrats Engineer Irvine Nyamapfene. Regional award for project manager of the year for work on electric bus infrastructure in London (could not hide such bid news at a time when Zimbabwe is struggling with energy and transport. I hope this project is replicated back home).

This is happening when Zimbabwe, where Nyamapfene was born, is currently going through serious power outages and public transport challenges.

Nyamapfene is a holder of a BSc in Electrical Engineering from the University of Zimbabwe. He later graduated with an MSC in Renewable Energy from the same university in 2008.

Between 2002 and 2008, Nyamapfene worked as the provincial manager of the Rural Electrification Agency (REA), a subsidiary of ZESA.

However, he left Zimbabwe during the economic and political turmoil of 2008 for the UK.

Since 2009, Nyamapfene has been the project manager at UK Power Networks.

Kana Dr Strive Masiiwa chaiwo was one a government employee. And it is said he actually took his initial thoughts on telcoms to his employers and instead of listening to him, they became his enemies. Imagine Econet iri a government company! Maybe dai yakazosakadzwa hayo nelooting and corruption.
We're always suspicious of our own asi zvikauya neane a different skin color tinoita setichapiyana kumhanyira kunogashira.

US$0 Harare
Shampoo 5 months ago

Congratulations Mr. Nyamapfene. We are proud of you some of us in Zimbabwe. Now the best is for you to come home and improve your country of birth. Kufumgawo kwangu hangu