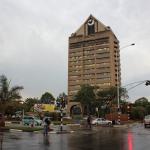 Muchechetere is among the five candidates that submitted their curriculum vitae (CVs) to contest the post ahead of yesterday’s deadline.

Mujeri, who is believed to be aligned to a ZANU PF faction backing Vice President Constantino Chiwenga, has the support of former chairperson and politburo member Ziyambi Ziyambi.

In separate interviews with The Standard, the aspiring candidates expressed confidence in landing the provincial chairpersons’ post.

Paradza said: “My time to lead is now. I am ahead of the pack because I’m mature, composed and more experienced.”

Musengi said he submitted his CV on Friday and believes his chances of winning are very high as he claims to control most districts in the province.

He said only Paradza will give him a good run for his money otherwise the other three candidates have no chance.

Mujeri claimed some candidates might be disqualified if they fail to meet the requirements, paving the way for him to land the post. He added:

I have 25 years in the province in a senior position, but some candidates like the two ministers are so busy that they are failing to report back to their constituency, what more if they are given extra responsibilities of driving the party in the province.

ZVLSL secretary Anthony Zunzanyika said they want Muchechetere to lead the province to ensure the party does not lose its revolutionary ideology.

The Standard said they could not reach Mliswa-Chikoka to get her comment.