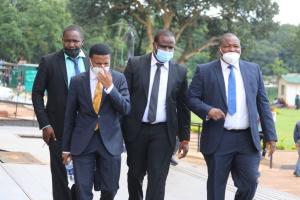 Jaji was testifying in the rape trial of the Goodness and Mercy Ministries founder and leader, Prophet T Freddy, as he is popularly known by his followers.

Jaji had previously been involved in the case having been part of a delegation that sat at Chief Chikwaka’s traditional court.

He said he did not see any reason for arrest arresting the cleric as the two had consensual sex. Said the former cop:

As a seasoned police officer and from my own assessment, I did not see any reason to arrest as there wasn’t a report.

I advised the complainant to report but she said she was not going to report.

Jaji said he advised Rutendo to report elsewhere if she was not comfortable to report at Juru Police Station where he was stationed but she still refused to report the alleged rape.

During cross-examination by T Freddy’s defence counsel, Everson Chatambudza and Jivas Mudimu, Jaji said he was not aware of any admission by the cleric to the rape claims as previously stated by Makuti.

He further stated that the affidavit signed at Chief Chikwaka’s homestead by the preacher was not an admission of rape.