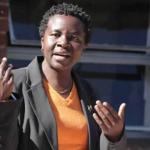 Majome who is allegedly a relative to President Emmerson Mnangagwa is demanding US$350 000 from Chin’ono. She said in her court papers:

The Plaintiff’s claim is for

a. Payment of US$150 000.00 or equivalent at the date of payment being damages for defamation.

b. Payment of USS75 000.00 or equivalent at the date of payment being damages for in iniuria.

c. Payment of US$75 000.00 or equivalent at the date of payment being damages for contumelia.

d. Payment of US$50 000.00 or equivalent as compensation in terms of section 85 (1) of the constitution for the infringement of her rights to dignity, freedom from cruel and degrading treatment and the right to serve in public office.

g. Costs of suit on an attorney-client scale.

Meanwhile, the defiant Chin’ono says he has received the summons but he is not going to retract what he said. The freelance reporter said:

I have just received this High Court document this afternoon. @ZACConline commissioner @JessieFMajome is suing me for hundreds of thousands of dollars. I have instructed my lawyer Beatrice Mtetwa to respond informing Jessie Majome that we will meet her in court! No retractions!

The point of no return has come . Zimbabwe ndinochema nenyika yangu .

Where is Cde Kufa kwarova the bush lawyer

Yes yes. It's lawful, peaceful and non political movement for the love of Our nation. IF ITS NOT US THEN WHO?.