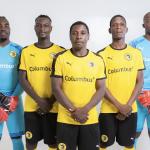 Division One debutants Golden Eagles Football Club have announced the signing of former Chicken Inn winger Christopher Samakwere ahead of the 2021/2022 season.

The 33-year-old attacker is among five veteran players recruited by Gondo Harishaye ahead of their maiden dance in the second tier of Zimbabwean football. The club said in a statement:

We’ve bolstered our squad for our maiden dance in Division 1, adding both steel and skill and plenty of leadership.

Samakwere played for Buymore and CAPS United before he joined Monomotapa Football Club in 2009 where he played in the African Champions League.

He attracted the attention of the Democratic Republic of Congo giants TP Mazembe who signed him.

On his return from the Congo, Samakwere came close to joining CAPS United, trained with Dynamos in 2016 and eventually signed with Chicken Inn in June of the same year.