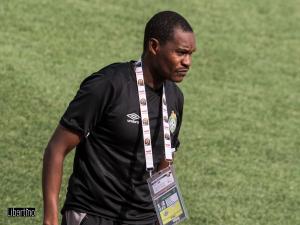 Former Warriors coach Norman Mapeza said that the threat of a FIFA ban ahead of the 2021 Africa Cup of Nations (AFCON) finals may have had a negative psychological impact on the players.

The Warriors travelled to Cameroon for the AFCON tournament with the Sword of Damocles hanging over their head after FIFA threatened to impose sanctions on the country.

The world football governing body had demanded that the Sports and Recreation Commission (SRC) reinstates the Zimbabwe Football Association (ZIFA) board it had suspended by 3 January 2022 or risk a ban.

The Warriors, whose AFCON campaign was bankrolled by the SRC, lost the first two matches against Senegal and Malawi before beating Guinea in the final group game.

However, the victory was a case of too little, too late as the two defeats had extinguished their hopes of progressing to the round of 16.

Speaking on the sidelines of the event where FBC bank was handing over the money they pledged for the team, Mapeza said:

I think psychologically some of them got affected but I spoke to them and said look guys let’s focus on what is at hand at the moment.

If we put more focus on what is going to happen, whether we are going to get banned or what, it’s not going to help us.

I think that talk helped us a lot in terms of the psychological side of the game.

GOOD MORNING LADIES AND GENTLEMEN. YES, THE WARRIORS WERE BEATEN BY SENEGAL AND MALAWI.

I PLAYED SOCCER IN THE LATE 1960s TO EARLY 1970s. PSYCHOLOGICALLY THE FIFA THREAT TO BAN THE WARRIORS COULD HAVE AFFECTED THEM.

IT HAPPENS NOT IN SOCCER ONLY, BUT ALSO IN OTHER SPORTS OR OTHER ACTIVITIES. IT ALSO HAPPENS IN EDUCATIONAL EXAMINATIONS. ONE HAS TO GO IN THE EXAMINATION ROOM WITH A CLEAR MIND, WITHOUT THINKING OF OTHER PROBLEMS.

THERE ARE ALSO OTHER CONTRIBUTORY FACTORS WHICH CAUSED THE DEMISE OF GREAT WARRIORS, BUT LET US SUSPEND THEIR DISCUSSION FOR A LATER DAY