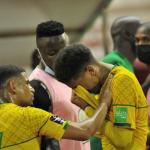 The Black Stars beat Bafana Bafana 1-0 on Saturday to book their spot in the next round of World Cup qualifiers.

Ghana won the game thanks to what looked like a dubious penalty, which resulted in the South African Football Association (SAFA) requesting FIFA to look into the matter.

According to GhanaSoccernet, FIFA on Tuesday confirmed that it is reviewing the matter without going into details of what the nature of its investigation into the match would entail. FIFA said:

FIFA has received a complaint from the South African FA in relation to this matter and will review it. Please understand we cannot comment further at this stage.

Bafana Bafana needed a draw to reach the third and final round of African qualifying for the 2022 World Cup, but Ghana won with the penalty that has generated a lot of debate.

The penalty was awarded after Ghana’s Leicester City midfielder Daniel Amartey went down following what appeared minimal contact from defender Rushine de Reuck, who was booked for his challenge.