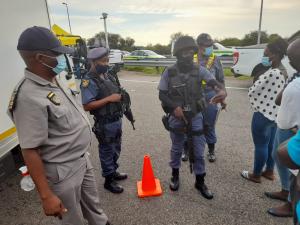 Political analysts believe that South Africa’s ruling African National Congress (ANC) has recently been putting in place stringent immigration measures in a bid to placate a dissatisfied populace ahead of elections in 2024 elections.

In November last year South Africa announced that it will discontinue the Zimbabwean Special Permits (ZEPs) that were set to expire the following month.

ZEP was introduced in 2009 by then Home Affairs minister Nkosazana Dlamini-Zuma, as a temporary solution to accomodate thousands of Zimbabweans who were fleeing economic hardships. Around 200 000 Zimbabweans benefited from the dispensation.

Motsoaledi said said students who wished to apply for permanent residence permits had to comply with the country’s immigration laws.

A member of the Parliamentary Portfolio Committee on Higher and Tertiary Education, Daniel Molokela (Citizens Coalition for Change) said:

We must not be surprised by such measures that are being put in place to stop African immigrants into South Africa. We must actually brace for more measures of the same nature.

We have in the past years witnessed thousands of Zimbabweans relocating to South Africa and that has created a political crisis for the neighbouring country.

The measures are being put in place by the ruling African National Congress (ANC) to solve the crisis ahead of the country’s upcoming polls.

Political analyst Eiffe Ncube concurred with Molokela adding that the stringent measures against migrants being imposed by South Africa will have negative effects on the local economy. He said:

Every employment policy that is implemented in South Africa, United Kingdom or any other country where Zimbabweans are based will affect our economy because the country is benefiting much from diaspora remittance.

The immigration crisis in South Africa is centred on the elections that are due in the country.

The ruling party is reacting to the extreme political groupings that have become very sensitive to the continued rise of immigrants in the country.

ANC is adopting populist political policies to deal with its rivals and secure victory in the upcoming elections.

The ruling African National Congress (ANC) is facing growing pressure from small opposition parties such as ActionSA and the Patriotic Alliance that have an anti-immigrant agenda.

In January, South Africans reportedly attacked Zimbabwean immigrants in areas such as Diepkloof, Rosebank and Turfontein.

On a serious note,i jotted about these issues last month.I said in the coming Zim Presidential election,ZANU pf will win(Using the same old dirty tricks)but that won't be victory because South Africa being the last dependable friend on the SADC region will totaly turn its back on Zimbabwe and impose some sanctions on us.I speak my sense again,the election results will be questionable and doubtfully South Africa will push for a GNU soon after elections

The Republic of South Africa is sick and of Zimbabwe problems.Note that 2 mediators @Thabo Mbeki and @Montantle tried to resolve the past and present issue but to no avail.

This is certainly not about xenophobia, it's about Zim hatichadiwi ukoko. U don't hear about Zambians or malawians