Farmworkers Reject US$30 Per Month Salary 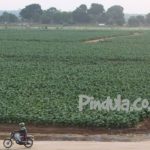 Farmworkers have rejected the wage increment approved by some unions in the agricultural sector that will see most of them getting $6 400 (US$30) per month.

The increment was agreed to by other unions, but the Progressive Agriculture and Allied Industries Workers Union of Zimbabwe (PAAWUZ) Wednesday rejected the offer, saying it was an insult to the sector.

The increment comes when the family monthly basket has risen to $40 000.

We reject the paltry salary increment signed by other unions for the agricultural industry, the general agriculture and horticulture sectors.

Six thousand and four hundred dollars only for a family of someone doing essential service is pathetic. Agricultural workers never stopped working during this (COVID-19) pandemic. They have endured so much to ensure that the nation is fed. They are now mocking them. Agricultural workers should stand up, unite and fight for their rights.

Farmworkers also appealed to the government to bear in mind that farmworkers are not animals that are, in fact, being treated better than farmworkers. They added:

There will be no Christmas to celebrate for the farmworkers this year, with the food basket now well above $40 000. How is one supposed to survive on $6 400 monthly?

PAAWUZ accused other unions in the agricultural sector of misrepresenting the interests of the workers.

The union is pushing for a US$80 minimum wage for the least paid as per the June 2018 schedule.

This is utterly insane,US$30!Whats abashing it's the same individual paid those nuts being the same person who votes for the same oppressor into power.This is purely witchcraft,the spirit of manipilation and control.These outrageous and disgusting money hungry mongrels fattening their pockets through the sweats of poor,uneducated and brainwashed peasants will burn in hell fire.
Down with cheap labour.

It's just too too little very embarrassing 30us really?