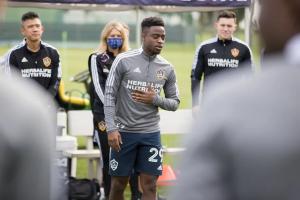 Mutatu, who was born in Zimbabwe before moving to Michigan as a young child, was selected by the LA Galaxy in the 2022 MLS Draft first round.

Speaking to reporters last week, Vanney said he was impressed by Mutatu’s versatility and indicated that the Zimbabwean may have a good chance of earning a contract this year. He said:

I would say Farai’s been impressive since day one. Obviously showing up and being fit and strong and winning the beep test pretty handily is a good sign for yourself in terms of that you’re ready to go.

It doesn’t necessarily mean everything but it’s certainly a great first impression for the young man. I mean, he’s powerful, he’s dynamic.

So for us, we feel like he just has a lot of potential and I need to learn about him more and more about what his greatest strengths are but he has shown really well in these first four days.

While nothing is guaranteed and Mutatu may ultimately begin his professional career with LA Galaxy II, Vanney said the newcomer has created a good impression of himself. He added:

Again, he has a lot of attributes that have him ready to compete, at least physically at the MLS level.

And then it’s just again to figure out what is the best role, what’s the best position to help him be successful short term and long term within the group of players that we have, but he’s certainly done a nice job of creating a first impression for himself.