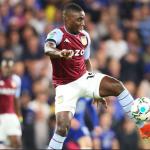 Aston Villa fans have said Zimbabwean international, Marvelous Nakamba has improved in terms of passing the ball, something he has been struggling with before.

Nakamba’s passing statistics from the Villa match against Brighton and Hove Albion suggest that out of the 28 passes he attempted, only one was not a success.

Marvelous Nakamba completed 27 of his 28 passes today (Saturday 20 November 2021) to finish with a passing accuracy of 96.4% #AVFC

He was very good Gregg. Once again. There are elements to his game he simply cannot do well, but others he does very well. Breaking up today and anchoring the defence he was brilliant.

This is where Dean struggled to utilize Nakamba, he’s generally done the basics very well. Asking him to progress the ball is too much.

HomeOfTheVilla @TheVillaHome also responded saying “He did great today. I’d love him to be a success.”

Jordan Jay @JordanJay90 echoed the sentiments above suggesting that the defensive midfielder produced a Man of the Match performance. Said Jordan Jay:

Louder for the people at the back!! MOTM

MattyD@MattyD54244799 said while Nakamba had improved, there were some areas he needs to work on to improve his game. Said Matty:

He’s the first upgrade for me I love him I really do best ball winner we have but the bad pass a game he makes gets us in deep normally. Hopefully, Stevie can improve that aspect of his game and we have a real player

Ｅｓｐｅｎ  @espenstrand echoed Matty’s sentiments saying Nakamba struggles with forward passing, and many view the challenge as the reason why Dean Smith chose the attacking-minded Douglas Luiz ahead of the former Club Brugge midfielder.

Nakamba arrived at Villa Park in 2019 from the Belgium side, Club Brugge, He has made 50 appearances for the Villains since then.

Hope Gerald will luv him and give him mo tym