Existing Houses In Arlington Estate Will Not Be Demolished - Government 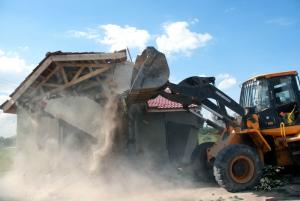 The central government has said houses in Arlington Estate will be demolished contrary to remarks made earlier by Harare Metropolitan Province Secretary for Provincial Affairs and Devolution, Tafadzwa Muguti.

He had earlier said developments in the Arlington Estate Phase 2 and Retreat areas fell in the airport red-zone and could be demolished.

National Housing and Social Amenities Minister Daniel Garwe, however, told The Herald that as far as the central Government was concerned, there would not be any demolitions. He said:

Muguti later said the Arlington development should never have been allowed but corners were cut during the reign of the late former President Robert Mugabe resulting in houses being constructed in the red zone.

He said in its current state, Arlington Estate would not be demolished, but the proposed second phase, would not be accepted. Muguti said:

I would like to set the record straight that we will not be demolishing existing structures that you see in Arlington Estate.

However, should Arlington Estate continue to be hard-headed and not cooperate with authorities, the provincial Government structures, cooperating with the Civil Aviation Authority of Zimbabwe and cooperating with the Airports Company of Zimbabwe, then it still remains the point that should they proceed with the development of Phase 2, which they have already been notified of, then those houses would likely be demolished.

In a statement, one of the property developers in Arlington Estate, Mr Eddie Charangwa, who is also the business development and marketing manager of Leengate, said the company developed properties in strict compliance with the law.

.... my Chinese gadget put logo where I typed povo

That area is full of people with money able to hire the best lawyers in the country. Hence the one who made the threat was made to withdraw and literally apologize. They cannot do what they do with the poor logo in high density areas where even court orders not to or to stop demolished are not complied with, just because the logo have no financial resources to go to the courts. It's as if those with monkey are more Zimbabwean than the povo.