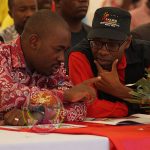 Former Zimbabwe Congress of Trade Unions (ZCTU) president, Mr Peter Mutasa has been dragged to the Zimbabwe Anti-Corruption Commission (ZACC) for allegedly mishandling a US$500 000 donation when he was ZCTU’s chairman of the investment committee.

Mr Thomas Masvingwe, a member of the ZCTU approached ZACC alleging that Mutasa and his accomplices abused US$500 000 which the union had received in 2014 from the Southern African Clothing and Textiles Union for the purpose of purchasing properties.

Sometime in 2014 the secretary-general advised the general council that the ZCTU had received five hundred thousand United States dollars ($500 000) from a South African union (Southern African Clothing and Textile Workers Union) for the purpose of acquiring property to be used in securing ZCTU self-sustenance and that they had identified properties in Prospect Park and Mazvikadei for purchase.

Masvingwe said he raised objections over the proposed deal, citing a glaring absence of due diligence but his reservations were disregarded.

He said he only discovered that Mutasa and the accused secretly purchased properties in Mazvikadei and Prospect, Harare at a price that was double the value of the properties. He added:

I reasonably suspect that the accused persons set out or connived to prejudice ZCTU, Wherefore I request that this matter is investigated and that remedial is taken.

ZACC spokesperson, Commissioner John Makamure, Wednesday told The Herald that the commission will consider the matter and take appropriate action.

Meanwhile, Mutasa has described the allegations as part of a smear campaign. He said this Thursday:

Over the past few days, there have been sustained attacks on my person. There were allegations that together with the @ZctuZimbabwe leadership of 2011-2016 we corruptly purchased buildings for ZCTU I wish to advise that these are just part of a smear campaign.

This comes barely weeks after President Emmerson Mnangagwa’s spokesperson, George Charamba had hinted that an audit was on the cards for Mutasa.

Mutasa who lost the presidency to Florence Taruvinga at the union’s October 2021 congress held in the capital, Harare, responded saying he was comfortable with any audit.

2014, 2016, 2021. Money came in 2014, whistleblower becomes Deputy Secretary General of the ZCTU, 2021 blowing of the whistle! It will be a very interesting case to follow as we will get to know better the 2 organizations, ZACC and ZCTU, and also the DSG who has been unnoticed by all for so long.

MY HOPE IS THAT ZACC SHALL BE PROFESSIONAL IN THEIR INVESTIGATIONS INTO THESE ALLEGATIONS BECAUSE THREE WEEKS AGO BLABBER MOUTH PUBLICLY AND MOCKINGLY SAID CAMARADA PETER MUTASA WAS GOING TO BE AUDITED. THIS WAS AFTER PETER HAD LOST HIS POSITION TO MRS FLORENCE TARUVINGA.

PETER MUTASA IS ALIGNED TO MDC ALLIANCE AND SO DO MOST ZCTU MEMBERS. THE CORE MEMBERSHIP OF GUYS WHO FORMED THE INITIAL MDC CAME FROM THE LABOUR MOVEMENT. THEREFORE THIS ISSUE IS BLABBER MOUTH [ZANU PF] VS PETER MUTASA[MDC ALLIANCE].

THE WHISTLE BLOWER IS NOT SURE IF THE PROPERTIES WERE BOUGHT AT THE CORRECT PRICES OR AT INFLATED PRICES.