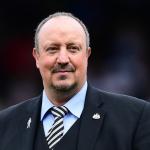 Everton has fired manager Rafael Benitez after less than seven months in charge.

The 61-year-old former Liverpool manager was appointed Carlo Ancelotti’s successor in June after the latter left the club to manage Real Madrid.

In a statement posted on the club’s official website, Everton said an update on a permanent replacement will be made in due course. The statement read:

Benitez, who joined Everton in June 2021, has left the club with immediate effect.

An update on a permanent replacement will be made in due course.

Benitez’s final game in charge of Everton was a 2-1 loss to Norwich City on Saturday, which was a ninth loss in the club’s past 12 league games.

The club then held an emergency board meeting on Saturday to discuss Benitez’s future and it was resolved to part ways with the Spanish coach.

Benitez was in charge of 22 games at Everton, winning only 7 of them, a win percentage of 31.8% – his lowest record in charge of an English club.

This guy is just another Mourinho, football has evolved and they still stuck in the past

Tough luck Comrade! Go back to the drawing board and bounce back bigger and better