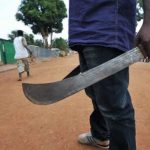 The European Union’s ambassador to Zimbabwe, Timo Olkonen, has exhorted the Government to urgently deal with marauding machete gangs (Mashurugwi) especially in the Midlands province where village communities are living in fear.

Olkonen was speaking to NewZimbabwe.com after a tour of projects in Kwekwe, Gokwe, and Kadoma districts funded by the Western countries bloc. He said:

We toured Kwekwe and Gokwe and had an engagement with civil society and non-governmental organisations.

The main issue which stuck out during those interactions was the issue of violence, particularly machete violence in the mining pits.

There is a need for the government to swiftly address the issue of violence in the artisanal mining sector.

We had a discussion on the social consequences of unregulated mining activities.

We gained an explanation that many young people are being engaged in artisanal mining in an uncontrolled manner.

The EU undertaking various incoming generating projects in the country for the vulnerable members of communities at an estimated cost of US$50 million.

The EU is running the inclusive poultry value chain (IPVC) project in Kwekwe which Olkonen said, “is set to improve the livelihoods of beneficiaries and improve nutritional habits.”

The Mbizo fruit and vegetable market in Kwekwe has 1 568 chickens where project beneficiaries sell their birds and eggs from.

The govt is the mashurugwi & they are a menace to society