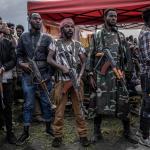 The Ethiopian government Thursday announced that secondary schools will be closed across the country to help in harvesting plantations of those who are on the frontline in the fight against the rebel fighters.

The Ethiopian Ministry of Education announced that all secondary schools throughout the East African country will be closed for a one-week period.

This is happening when the Ethiopian National Defence Force (ENDF) supported by regional allies and the popular movement intensified its military operations against the rebel Tigray People’s Liberation Front (TPLF).

Over the past few days, the ENDF jointly with regional forces and militia fighters has claimed control of strategic cities and towns across Amhara and Afar regions, bordering the Tigray region.

Since the Ethiopian Prime Minister Abiy Ahmed joined frontline combat last week, ENDF and its affiliate forces have shown strong mobilization against rebel forces amid the expanding conflict in the northern part of Ethiopia.

Last week, Ahmed had called on “all patriotic Ethiopians” to join him in frontline combat against forces loyal to the TPLF.

The Tigray People’s Liberation Front (TPLF) was formed in the mid-1970s to fight for the rights of Tigrayans, a relatively small ethnic group that accounts for just 5% of the population and had long been marginalised by the central government.

Throughout the 1980s the TPLF emerged as a formidable challenger to Ethiopia’s then Marxist military dictatorship and eventually led an alliance of militia organizations, the Ethiopian People’s Revolutionary Democratic Front (EPRDF), that overthrew the Soviet Union-backed regime in 1991.

The current conflict started around 2018 when Abiy Ahmed of the Oromo ethnic group was elected prime minister.

Abiy unseated many Tigrayan officials, charged some with corruption and introduced a set of political reforms which sidelined the TPLF.

He disbanded the EPRDF coalition government in 2019 and moved to create the new Prosperity Party (PP).

TPLF refused to join the group and moved back to its stronghold.

Abiy postponed the 2020 general elections citing the COVID-19 pandemic, but officials in the Tigray region went ahead with regional elections in September 2020.

In October, the federal government began withholding funds from the regional administration.

In early November 2020, TPLF forces were accused of having attacked and looted federal military bases in the region. Abiy kicked off a military campaign in the Tigray region, known as Operation Law enforcement.

Ahmed, call me there.
I will crush them like peanuts

What are you fighting for