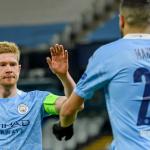 Meanwhile, the match between Brentford and Manchester United was postponed after a considerable number of United players had tested positive for the coronavirus.

Dean Smith-led Norwich lost to Aston Villa by 2 goals to nil. Unfortunately, Villa were however without Zimbabwean midfielder, Marvelous Nakamba who is facing a lengthy spell out on the sidelines.

Nakamba was taken off on the hour at Anfield three days ago with an MRI scan since revealing he’s picked up a significant knee injury.

The 27-year-old went to see a specialist prior to Villa’s 2-0 win over Norwich and Gerrard has revealed that the news isn’t good. Gerrard said, with Nakamba also set to miss January’s Africa Cup of Nations. He said:

The best way to put it is that we’ve had confirmation that he has got a knee injury.

We’re really going have a serious chat tomorrow (Wednesday) in terms of whether we want him to have surgery or whether we’ll manage the injury conservatively.

He said Nakamba was certainly going to be missing for some time because it’s a serious injury.

@Nimrod. I am also worried about that

Thnx Pindula ,this is a good move ,hope to see more soccer news and results in future

This is the pindula that we want. Thank you for giving crucial sport updates