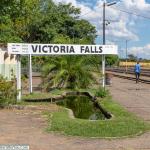 Marauding herds of elephants have reportedly imposed a unique night curfew in Victoria Falls city centre as they roam the streets every night, forcing residents to stay indoors.

Residents of the nearby Low Density suburb and Rainbow Flats are forced to retreat indoors as early as 7 PM as the presence of jumbos on the streets has become common.

Perimeter fences and pre-cast walls have been demolished, gardens and fruit trees destroyed as the elephants hunt for food.

So far there has been no attack on humans although some bulls have reportedly charged at some residents.

Speaking to Chronicle, Douglas Musiringofa who lives in Dale Crescent in Low Density said the elephants are permanent night visitors. He said:

It is now dangerous to walk along Dale Crescent at night as elephants from a bush near Baobab Primary School use this road.

Not only are elephants a menace to Victoria Falls residents, but baboons during the day and hippopotamuses at night have become an environmental hazard.

Another resident Enoch Dzambo who lives along Hobson Drive believes hippos are more dangerous than elephants. He said:

Besides elephants, we have two hippos that also come every night and leave in the morning.

They will be browsing on the lawn outside and I think they pose more danger than elephants.

Meanwhile, the Zimbabwe Parks and Wildlife Management Authority has reported that most human-wildlife conflict deaths are caused by hippos, elephants, crocodiles and lions.

As far as I know Vic falls is part of a national park... it's a normal thing for elephants to roam around..

Where is zimparks hee