EFF: FW De Klerk Dies With No Honour, With A Dark Cloud Of Traumatising Families 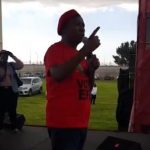 The Economic Freedom Fighters (EFF) party has released a statement following the death of FW de Klerk, the last apartheid president saying he “dies with no honour, and with the dark cloud of having maimed and traumatised families across our nation.” Pindula News presents EFF’s statement.

The EFF notes the death of the Former Apartheid President F.W De Klerk, who presided over a murderous and inhumane regime of terror against African people. De Klerk, who denied that the legislated separate development, exploitation, torture and murder of black people was a crime against humanity, dies with no honour, and with the dark cloud of having maimed and traumatised families across our nation.

It is for this very reason that the EFF calls for De Klerk not to be given a State Funeral of any category, as he lost the right to be honoured the day that the evil regime he led collapsed in 1994. It was the Apartheid era that was best placed to honour De Klerk as its loyal servant, not a democratic society that is committed to reversing the ills of the dark days of black exploitation.

To honour De Klerk with a State Funeral would be to spit in the face of gallant liberation heroes who suffered in his hands, and had their children murdered in his quest to stifle the freedom of black people. A State Funeral for F.W De Klerk would be an insult to the families of the Cradock Four, it would undermine the memory of the people of Boipatong, Mthatha, Bhisho, the people of Vosloorus and many communities who were maimed by his state-sponsored black on black violence.

The EFF will oppose through public protest and all means necessary, a State funeral for a man who died without ever accounting for the blood on his hands. It cannot be the democracy that he killed so many to prevent, that honours F.W De Klerk.

De Klerk died denying the humanity of the black people that Apartheid subjugated and murdered, and was on a desperate mission to cleanse a legacy of genocide. A democratic society must never partake in assisting him to build a false legacy, which will erase the dead bodies his life is marked by.

Funny how he speaks such of De Clerk but glorifies Mugabe. Yet, they both committed genocide. Malema is so unpredictable!

If Zimbabwe had an opposition leader like Malema things could have been in a better shape by now. This young boy (Chamisa) is ignorant n knows nothing about politics. He wkn last elections but couldn't come up with brilliant ideas to claim his victory.. Ini honestly I think chamisa akudya na ED pls fungai ipapo zvimwe zvanoita so cherk akapinda hapana apa. Expect a change 10 years max from now kwapinda umwe asiri chamisa na ED

Malema your words are deep my man, i feel tears flow down my cheeks. A murderer is a murderer. He would have apologized to the South African community in his life time. He wrote a piece to eradicate the black people worldwide by giving them poison in various food stuff. He deserve pauper burial. I HATE HIM

Malema you are right my man

Same holds for these black colonialists