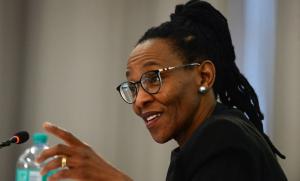 The Economic Freedom Fighters (EFF) led by Julius Malema has endorsed Mandisa Maya for the Chief Justice role in South Africa. Mandisa who is the Judge President of the Supreme Court of Appeals was recommended by the Judicial Service Commission (JSC) as the next Chief Justice of the Constitutional Court. Pindula News presents EFF’s statement:

The Economic Freedom Fighters welcomes a landmark decision reached by the Judicial Service Commission (JSC), to recommend Judge President of the Supreme Court of Appeals Mandisa Maya as the next Chief Justice of the Constitutional Court.

In a historic conclusion. reached in deliberations after a week of thorough interviews of four candidates for the position, the JSC has made one of the most transformative decisions since its inception.

By recommending Judge President Maya, who had a stellar interview, the JSC has provided the President of the Republic an opportunity to right the many wrongs in our judicial system in terms of gender representation.

Judge Maya expressed a necessary lack of appetite to descend into the political arena, and was honest and direct when confronted by difficult and sometimes controversial questions. Her interview was not only qualitatively superior, but revealed a candidate for Chief Justice who will not be a divisive force in society.

The Judicial Service Commission has played its part, and the final decision now rests with the President of South Africa.

We commend the Commission for remaining steadfast in its duties, in ensuring that all candidates are interviewed by a diverse set of Commissioners. hailing from the legal fraternity and political community.

The way in which the Commission is constituted is pivotal to our democratic project. as it ensures that those who have received a mandate from the electorate play a role in the appointment of Judges. This ensures that the process is not run by elite individuals. with no democratic mandate, who assume their expertise is above the democratic will of our people.

The Commission refused to bow to the pressure of Apartheid Judges and elements in the media who have exhibited a disturbing investment in the emergence of certain candidates. It must be commended for showing it can operate independently and not bow to manufactured outrage.

The EFF will reflect on the interviews and take necessary action where abnormalities and signs of judicial capture and manipulation were exposed.