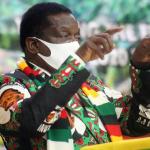 President Emmerson Mnangagwa has urged party members to gear up for the 2023 elections to ensure the governing ZANU PF party retains its power.

Mnangagwa, who was unanimously endorsed as the ZANU PF 2023 presidential candidate for his second and final term by all the organs of the party, defeated the second runner-up, Nelson Chamisa of the MDC Alliance in the 2018 elections by a narrow margin.

The journey towards a resounding success for the 2023 elections for ZANU PF has already begun.

Let us go back to our cells, branches, wards, districts, and provinces to establish definitive figures ward by ward and constituency by constituency.

We have an upper hand that should romp to victory in 2023. in the 2023 harmonised election, ZANU PF is silencing all detractors once and for all.

We are building an indestructible party for our country. ZANU PF is about productivity, production, and hard, honest work.

We are a rejuvenated party and we are on an irreversible mission to improve the quality of life of our people.

Mnangagwa accused urban councils, most of which are now controlled by the Douglas Mwonzora-led MDC-T, of corruption and incompetency.

However, there are fears that the 2023 elections will be marred with violence after ZANU PF supporters attacked MDC Alliance members during Chamisa’s recent “Meet The People Tours” in Masvingo, Manicaland, and Mashonaland West provinces.

It seems you lack the confidence Mr President,you are already gearing for 2023 elections now.Why can you not fulfill your promises Sir?

It will win , ED pfeee

US$0 Harare
Chikandamina 8 months ago

No to violence,needs freedom of speech towards 2023 .