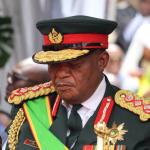 President Emmerson Mnangagwa’s alleged tussle with his deputy, Vice President Constantino Chiwenga for the control of the ruling ZANU PF party has reportedly spilt into the National Peace and Reconciliation Commission (NPRC).

Reports claim that Mnangagwa and Chiwenga are in a fierce battle to control the ruling party and government.

Mnangagwa recently restructured the NPRC, a supposedly independent commission whose mandate is to address the country’s past conflicts, including Gukurahundi.

Moyo was an ordinary commissioner before her elevation by Mnangagwa.

Meanwhile, Chiwegedere has been acting as NPRC chairperson in the past few months in the absence of ailing Retired Justice Selo Maselo Nare.

She is one of the two commissioners retained from the previous commission, whose term of office expired early this year.

I can confirm the Reverend Dr Chiropafadzo Moyo is the new vice-chairperson of the NPRC.

But on the issue of why there are such changes, I cannot comment. I am just a spokesperson and I can’t comment on that.

NewsDay reported sources as saying Moyo was strategically positioned at the top NPRC post to guard against possible threats on Mnangagwa’s office within the commission.

Mnangagwa has been cited as a key player in the Gukurahundi atrocities between 1982 and 1987 as he was State Security minister at the time. Said a NewsDay source:

She (Moyo) is not only now influential in the commission, but she will enjoy heft salary benefits.

Now that she (Moyo) has been elevated from being a commissioner to become the vice-chair, it means her package has also been raised.

When contacted for comment, Chigwedere refused to comment on the developments saying she was not feeling well.

Wouldn't it be beneficial, to both the retired judge and the Commission,to have the retired judge retired from the Commission on medical grounds to afford him a chance to recuperate from whatever is ailing him without the inevitable pressure of somehow feeling like his absence from the Commission is triggering those alleged manouvres? If the Act doesn't already have a provision for Commissioners to elect their Commission's Chairperson, I feel the responsible administrator of the Act should hasten to move such an amendment in Parliament. Though not foolproof, such a move could help in resolving alleged influences of that nature. I feel all independent Commissions should be legally capacitated to independently elect their own respective Chairpersons.

IT IS NOW BECOMING A SONG THAT THERE IS A TUSSLE FOR THE CONTROL OF ZANU PF AND GOVERNMENT BETWEEN PRESIDENT ED MNANGAGWA AND VICE PRESIDENT CONSTANTINO GUVHEYA CHIWENGA.

WE ARE THE PEOPLE ON THE GROUND. LET US ANALYSE FACTS. THE HEAD OF STATE, GOVERNMENT AND ZANU PF IS PRESIDENT ED MNANGAGWA WHO IS SECONDED BY CONSTANTINO GUVHEYA CHIWENGA.

IN GOVERNMENT AND ZANU PF, PRESIDENT ED MNANGAGWA IS TAKING THE POLE POSITION AND VICE PRESIDENT CONSTANTINO GUVHEYA CHIWENGA IS SECOND FIDDLE WHEN PERFORMING DUTIES IN THESE INSTITUTIONS ?

WE HAVE SEEN ON TELEVISION PRESIDENT ED MNANGAGWA COMMISSIONING A 23 KILOMETRE STRETCH OF THE ROAD IN CHIPINGE. WE HAVE WATCHED ON TV PRESIDENT ED MNANGAGWA LAUNCHING A GREEN VEGETABLES GARDEN IN MATABELELAND SOUTH. ON BOTH OCCASIONS WE WATCHED VICE PRESIDENT CONSTANTINO GUVHEYA CHIWENGA SITTING IN A CHAIR LISTENING ATTENTIVELY TO HIS SENIOR AS THE PRESIDENT ADDRESSED THE CROWDS. WHAT CORDIAL WORKING RELATIONSHIP WOULD YOU WANT ?

VICE PRESIDENT CONSTANTINO GUVHEYA CHIWENGA THE OTHER DAY CAME OUT ON FULL THROTTLE THREATENING TO CHANGE THE CONSTITUTION AND MAKE PRESIDENT ED MNANGAGWA OUR LIFE PRESIDENT. WHAT SUPPORT WOULD YOU NEED FROM YOUR VICE PRESIDENT WHICH WOULD EXCEED THIS ?

IN ENGLAND I UNDERSTAND THAT THEY SAY, [THERE IS NO SMOKE WHERE THERE IS NO FIRE]. BUT HERE I THINK THE OPPOSITE IS TRUE.