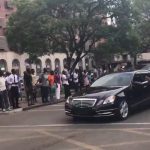 A 25-year-old motorist was on Saturday assaulted by soldiers who were part of President Emmerson Mnangagwa’s escort.

The incident happened at the intersection of Seke and Cripps roads in Harare in the morning.

The motorist, Malvern Samakande, was later detained at the Mbare police station on charges of obstructing the presidential motorcade.

The Forum has attended today at Mbare Police Station to represent Samakande, who was accused of failure to obey road signs and signals.

Allegations are that Samukande failed to give way to the presidential motorcade.

It was alleged that Samukande failed to obey multiple police officers stopping the movement of traffic and was only stopped by the presidential guards.

This was not the first time that a motorist has been arrested for obstructing the presidential motorcade.

In 2016, Joseph Chakanetsa was sentenced to two years in jail for cutting the then President, the late Robert Mugabe’s motorcade in Harare.

Chakanetsa was convicted by the court of negligent driving on his own plea of guilty.

He was slapped with another 60-day jail term for failing to stop after committing the offence.

On top of that, Chakanetsa had his driver’s licence cancelled and he was banned from driving heavy vehicles and public transport for life.

PLEASE SPARE YOUR TIME. I WOULD LIKE TO EXPLAIN FURTHER WHAT CRIMES WERE COMMITTED IN THIS INCIDENT.

THERE ARE TWO OFFENCES WHICH WERE COMMITED HERE. MALVERN SAMAKANDE ADMITTED THAT HE OBSTRACTED THE PRESIDENT'S MOTORCADE BY PAYING "ADMISSION OF GUILTY FINE".IF HE HAD NOT COMMITED THE OFFENCE HE SHOULD NOT HAVE PAID A FINE. HE SHOULD HAVE GONE TO COURT TO EXPLAIN HIMSELF.

THE SECOND OFFENCE WAS meCOMMITED BY THE SOLDIERS IF THEY TRULY ASSAULTED MR SAMAKANDE. THE LAW REQUIRES THAT A SECURITY AGENT ARRESTS A PERSON WHO HAS COMMITED AN OFFENCE AND TAKE HIM TO THE NEAREST POLICE STATION. A SECURITY AGENT CAN ONLY APPLY MINIMUM FORCE TO EFFECT AN ARREST AND THAT APPLICATION OF FORCE MUST IMMEDIATELY STOP ONCE THE ACCUSED IS ARRESTED.

WHAT SHOULD HAVE HAPPENED WAS THAT MR SAMAKANDE SHOULD HAVE REPORTED ASSAULT ON HIMSELF BY THE SOLDIERS. POLICE AT MATAPI POLICE STATION COULD HAVE OR THEY CAN STILL INVESTIGATE HIS ASSAULT COMPLAINT.

This story is a repeat,i read this news sometime early this week,i think last sunday..its not a day javu ..i read this!

I agree with you. Respect the president's motorcade. Common knowledge and no politics pakadaro. Otherwise, six-pack rokukuvadza.