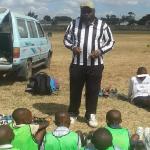 The former Dynamos left-back, nicknamed Samora, was arrested for allegedly sodomising a 13-year-old student at his Mufakose Sports Academy.

The case has now been deferred to 20 January 2022, as the presiding magistrate was not available to hear the matter on Monday.

Chirambadare (56) was granted $5 000 bail by High Court judge, Justice Webster Chinamhora in early May this year after spending a week in remand prison.

Prosecutors told the court that Chirambadare abused the boy over a period of time until the minor developed piles.

The abuse took place in Chirambadare’s house in Mufakose when he would send the minor to clean the place.

Chirambadare would threaten to kill the boy if he revealed the ordeal to anyone, the court heard.

The matter came to light after the boy developed some piles after which he revealed his abuse to his uncle.

The uncle later helped him report the matter to the police leading to the arrest of Chirambadare.

Meanwhile, several court cases have been postponed to next year due to the absence of court officials, some of whom have contracted the novel coronavirus.