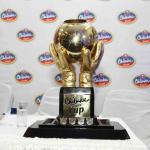 FC Platinum, who are the inaugural Chibuku Super Cup winners, have become the country’s dominant force in the league championship, having won the last three titles.

The match could be watched by up to 20 000 fans after the PSL acceded to pleas by fans and reduced entry charges to US$3 for the cheapest ticket.

A maximum of 20 000 vaccinated fans, which is a third of the stadium’s capacity, are allowed to watch this blockbuster clash.

DeMbare and FCP are meeting for the second time in the Chibuku Super Cup, having last met in a quarter-final duel of the 2015 edition when Dynamos won 7-6 on penalties.

Dynamos went on to reach the final but were beaten 2-1 by Harare City.

Since then, the Harare giants are still searching for their first taste of the Chibuku Super Cup success.

Dynamos coach, Tonderai Ndiraya, who guided the club to the 2015 final before winning it with Ngezi Platinum Stars the following year, has a feeling he could do it again this time around. Said Ndiraya:

We (Dynamos) have not won this cup before and we have a great chance of winning it this year considering the way we have performed so far in the competition.

… It will not be easy though against FC Platinum, but we will do our best to win the match. We are playing an organised and strong team.

They have dominated local football for some time now and have won almost everything on offer, including this Chibuku Cup.

They deserve respect for their achievements. These achievements are motivating us to want to play well and win the game.

Meanwhile, FC Platinum, who will be making a fourth appearance in the Chibuku Super Cup semis, have won the trophy in 2014 before losing to Ngezi Platinum in 2016.

FCP coach Norman Mapeza has experienced players in his squad who include Warriors player Kelvin Madzongwe, Silas Songani, Rahman Kutsanzira, Rainsome Pavari and Rodwell Chinyengetere, but he is worried about Dynamos’ current form. He said:

Our preparations have gone on very well, but as you are aware, we are playing a team that has done well so far in this tournament.

If you look at their statistics, they only conceded two goals in 11 games. So we are playing a very good side.

Winners of this year’s edition will pocket US$75 000, which will be paid in local currency at the prevailing rate.

They will also represent Zimbabwe in the CAF Confederation Cup.

The two losing semi-finalists are set to receive US$25 000 each, while those teams that crashed out in the last eight will get US$15 000 each.

Teams that failed to go past the group stage are guaranteed US$7 000.

US$8.00 Chitungwiza
Mdara Odza 6 months ago