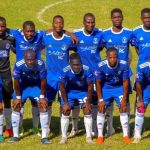 Dynamos are through to the semi-finals of the Chibuku Super Cup after edging Black Rhinos 1-0 at Baobab Stadium on Sunday.

DeMbare have joined Cranborne Bullets, FC Platinum and Ngezi Platinum Stars in the last-four round of the competition.

Frank Makarati headed home Godknows Murwira’s corner kick in the 57th minute to give the Glamour Boys the victory over the army side.

Meanwhile, Dynamos assistant coach Gift “Umbro” Muzadzi reportedly collapsed at Baobab Stadium before kickoff and was rushed to the hospital. His condition could not be immediately ascertained.

Congratulations to Dynamos ,Cranborne.fc platinum and ngezi for storming into the semi-final

Congratulations glamour boys, get well soon Umbro we're with u in our prayers

Welldone guys bt the trophy is for ngezi chill guys