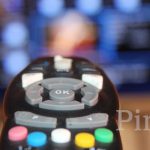 DStv has launched a campaign called TisuMaShark that was inspired by Stunner and Bahupi’shit song.

Liz Dziva, publicity and public relations manager of MultiChoice Zimbabwe, said the idea behind the campaign is to communicate how they create value for their stakeholders.

The campaign is also aimed at highlighting the diversity and characteristics of DStv’s customers, showing how their lives can influence other people for the better and how their successes can be emulated. Dziva said:

Some years ago Stunner and BaShupi had a hit song called TisuMaShark and the campaign has flowed from this.

In our campaign we are looking to showing how our customers are leaders and people worth emulating, so the campaign pays homage to their ideas, strengths, successes and exemplary lives.

The profiles will be gentle insights into the people selected, highlighting how DStv has enriched their lives, what makes them tick and showing how they contribute to families, businesses, communities and the country as a whole.

Dziva added that they chose sharks because they are sharp, savvy, decisive and have many positive characteristics.

She added that a print and online campaign will feature regular profiles and will be sustained so that a variety of people can be platformed.

The campaign is aimed at highlighting the resilience some individuals had even in the face of challenges including the COCID-19.