Drunk Roki Falls On Stage Attracting The Wrath Of Fans 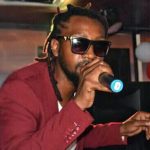 Rockford Josphat, a high-riding Zimbabwean musician fondly known as Roki recently went on stage visibly drunk and fell, much to the chagrin of fans.

He then failed to finish his performance at the Odyssey Hotel in Kadoma recently.

Roki’s performance followed after Enzo Ishall. The Patati Patata hitmaker is reported to have gone on stage, visibly drunk and performed one song whose lyrics he struggled to recite before falling down and taken off the stage.

A disgruntled fan only identified as Delight expressed anger over Roki’s behaviour. He said:

The show was a waste of time and money. These artists should take promoters, fans, and venue owners seriously. Roki only performed one song before he fell down. He was drunk and everyone could see that. He was then taken to the swimming pool side where he lay down as people took pictures of him and with him.

The show was attended by a few people and after Roki’s stunt people started leaving the joint. That’s disrespectful to fans. He has been doing well but it seems old habits die hard. He is back to the controversial lifestyle that almost put an end to his career.

Roki’s career was almost over after a long sabbatical that forced him into farming at his Seke home before signing under Passion Java Records where he produced the album Colours which carries songs such as the hit Patati Patata, Uchandifunga, Zviriko, Chidzoka remix among others.

Roki made history by becoming the first Zimbabwean artist to gunner a million views in 24 hours with Patati Patata which features legendary Kofie Olomide and Ray Vanny.

However, critics have accused his record label Passion Java Records of fabricating numbers.

Old habits die hard.A monkey in a velvet suit is always a monkey.