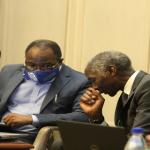 A top Sexually Transmitted Infection (STI) infections expert and venereologist has flagged a gonorrhoea variant that has developed resistance to available treatment options in Zimbabwe.

Dr Francis Ndowa said the Neisseria gonorrhoeae, also known as gonococcus, the bacteria that causes Gonorrhea, has developed resistance to antibiotics such as Penicillin, Tetracilicin, and Quinolones that have been used to treat Gonorrhea in the country.

He said this could have long term health complications in both men and women such as infertility, stillbirths. He said Zimbabwe has been left with only one treatment option available.

Dr Ndowa made the revelations in an interview with HealthTimes on the side-lines of the Antimicrobial Resistance (AMR) policy dialogue in Harare. He said:

We are now on the last class of Antibiotics called Cephalosporins and of the Cephalosporins, the real effective one is the one called Ceftriaxone which is an injectable.

For anyone who comes now with the Gonorrhea STI to be effectively treated, they need an injection of Ceftriaxone, there are no longer oral antibiotics, the gonococcus has become resistant to these Cephalosporins.

The other classes of antibiotics over the years have become useless so we are looking at a group of Cephalosporins that are still effective in treating Gonorrhea.

We have had a superbug from Asia, Japan that reached the United Kingdom (UK) overnight because of travel that was even resistant to this injectable antibiotic and they had to get a special antibiotic of which if it were to happen in Zimbabwe today, we would have to have a special import license to get that antibiotic to treat somebody similarly.

He said Gonorrhoea could go untreated in some people because in some cases General Practitioners prescribe antibiotics without identifying the true nature of the infection. Said Dr Ndowa:

It’s a big problem that many times patients present to General Practitioners with a bit of discomfort on the genital area and the general practitioner immediately prescribe an antibiotic without actually identifying what the infection is really.

It’s really dangerous and this has led us to a situation where the World Health Organisation (WHO) is looking into finding out what it is we need to do when we come to a situation of untreatable Gonorrhea.

The two implications that could arise from this are that we will have Chronic infections, people will carry chronic infections and we will start seeing the long term complications of simple infections in men and women such as infertility, ectopic pregnancies, losing babies because the fallopian tubes would have been affected because these are sexually transmitted diseases that affect the genital tract.