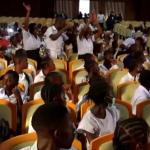 Hundreds of schoolchildren in the Democratic Republic of the Congo (DRC) have stormed the country’s parliament building, demanding the government raise teachers’ pay to end a strike that has stopped lessons for more than two weeks.

The teachers went on strike at the start of October to protest against several issues, including salaries and the retirement age.

Jean-Marc Kabund, the first vice president of the National Assembly, spoke to the students, assuring them that a solution will be found soon to end the teachers’ strike.

Just before schools opened for the new term on 4 October, teachers’ unions in several provinces announced their intention to go on strike to express their displeasure over meagre pay.

A threat by Mwaba to remove striking teachers from the payroll has not broken their spirit.

Zimbabweans youth would rather:
a)Not do it at all.🤥
b)Protest through social media😂

Better for them in Zim hakuna zvakadaro

In Zim zvinonzi It's STAGE-MANAGED, if you know you know kkkkkk

If we could do worse in zim we would start by beating the so called minister..

Better for them in Zim hakuna zvakadaro