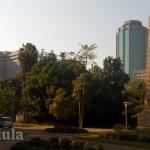 UPDATE ON RESERVE MONEY AS OF 24TH DECEMBER 2021

2. The decline in reserve money largely reflected a decrease of ZW$752.05 million in banks’ liquidity (RTGS balances) at the Central Bank, which was partially offset by increases of ZW$612.27 million and ZW$12.89 million in required reserves and currency issued, respectively.

3. Government deposits at the Reserve Bank increased by ZW$5.51 billion, resulting in liquidity withdrawal from the market.