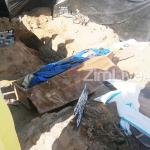 The Doves Funeral Services driver involved in the Nyanga empty coffin scandal, Sam Chitsike, was fired on 31 December on allegations of negligence of duty, a report claims.

I am not in any position to comment on any development at the moment. As we said, we are letting the police do their work and we all make sure this issue is put to bed.

Doves came under scrutiny last year after it gave the relatives of the deceased Maxwell Chimwamurombe an empty coffin for burial.

The body was allegedly kept in a morgue for six months, between March and August last year, long after the coffin supposedly containing Chimwamurombe’s remains had been buried in Nyanga’s Matoropoto Village.

The body was later given a pauper’s burial, at Granville Cemetery.

Chitsike is being accused of concealing the mix-up and later notifying the Chimwamurombe family of the alleged faulty burial.

He, however, claimed that he was merely a transporter and the fault was with the morticians.

Chitsike said he had collected the body from Parirenyatwa, together with two plastic bags, which contained the deceased’s belongings.

Meanwhile, the body was later exhumed from Granville Cemetery for reburial.

I'm looking for a room to rent in Bulawayo . Location: Tshabalala ,Nkulumane and Pumula it's urgent guys help me

Reply Report Abuse
For the ones you love 4 months ago

Doves owes us its clients a full explanation of what actually transpired.Why victimize the driver?

Reply Report Abuse
Man of the moment 4 months ago

It was difficult for Chitsike to keep Quiet or even him to be haunted by late's Spirit zviri mu culture hedu izvozvo akatobatsira clan yake yaizopera uyu akupfuka mind you. Now about Basa don't worry uchavana rimwe panext Parlor apo send in your CV's Monday

US$12.00 Chitungwiza
Mdara Odza 4 months ago

Someone had to be scapegoated and in this case it's the driver, Mr sam Chitsike. It takes combined efforts of more than one person to mix up a corpse and the Nicodemusly burying it at a local cemetery. Maybe Chitsike's fault is notify the Chimwamurombe family about the mix up.