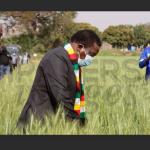 Chin’ono described the deceased former BancABC boss as one of the few people around President Emmerson Mnangagwa who was truly eager to transform Zimbabwe. He said:

I am saddened to hear that Doug Munatsi has passed on in a fire tragedy. He was 1 of the few people around ED who genuinely wanted to see Zimbabwe succeed, and at many times felt let down by his bosses. We used to argue about politics but we remained cordial and respectful. RIP.

Condolences continue to pour in with the exiled former Local Government minister, Saviour Kasukuwere describing Munatsi as a “fine Zimbabwean.”. He said:

Deepest condolences to the Munatsi family on the tragic demise of Doug. A fine Zimbabwean, Mukuwasha l am shattered. We chatted a few weeks ago and l appreciated your warmth and understanding. Fambai zvakanaka Samanyanga.

I am distraught. I have lost a dear friend Douglas Munatsi. A man I called Sekuru. Zimbabwe has lost an entrepreneur and patriotic citizen. So many fond memories. Doug, you will be sorely missed. Our deepest condolences Ambuya Bindzile, Tawana-Musa, Bongani and Tawanda Jnr

I first met Doug years ago in Johannesburg when he was running Bank ABC, which he founded. He impressed me with his intellect, his humility, his business acumen, and most of all his passion for Zimbabwe and Africa. RIP Doug! You will be missed.

Meanwhile, police are investigating the fire incident with sources suggesting that there was foul play.