Don't Use Your Position To Intimidate People, Mliswa Tells Chiwenga 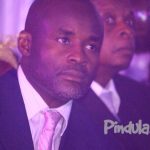 Chief Murinye of Masvingo ruffled Chiwenga’s feathers after he last weekend after warning President Emmerson Mnangagwa of a possible coup if he failed to deal with worsening corruption.

During his address at the funeral of a top civil servant in Masvingo last week, Chief Murinye urged Mnangagwa to act on high-level corruption in government and ZANU PF or the military would intervene.

Addressing the annual Chief’s Conference that was presided over by Mnangagwa in Harare on Friday, Chiwenga said chiefs should follow proper government procedures if aggrieved on any issue. He said:

That a chief just stands up and says what they want is never done, do you understand me Chiefs?

That is only done by those who drink Mutoriro (illicit brew), in this country, it is never done. We have one Monomutapa (Mnangagwa).

… This is the Republic of Zimbabwe, that is not done. Such foolishness is not done, I hope you understand me. What did I just say?

Posting on Twitter, Mliswa said the country’s leaders should listen to people and not threaten them. He said:

News that VP Chiwenga threatened Chief Murinye is wrong and disturbing on every level.

This is exactly how Mugabe operated, threatening all those who had divergent views.

Leadership should listen to people and not threaten them. We are all under Chiefs. Politicians are not the owners of the country.

There is freedom of expression which the Chiefs can also exercise and they speak on behalf of the people. They can’t be threatened over that.

The former ZANU PF Mashonaland West provincial chairman said the ruling party dragged traditional leaders into politics and should not cry foul now that they are critical of the government. He said:

Chiefs were independent and apolitical but ZANU PF got them involved in politics yet when they press a divergent button you attack them.

You dragged them into politics so accept all versions of that involvement. We can’t be a country where people are afraid of expressing their views.

We don’t have to continue intimidating people. We can’t be a country known for abusing its people.

Mliswa expressed disappointment over Chiwenga’s remarks saying inasmuch as the former army commander sacrificed for the country’s liberation, this is not how things should be done.

Can someone please help me with an English or isiNdebele translation of the word MUNHUMUTAPA?
I read somewhere that General/President of chief's council said that Zimbabwe has only 1 MUNHUMUTAPA(President ED).

US$0 Harare
Mrs soko 5 months ago

Chief's utterance is brilliant,,, surely in zim we need another one tt can address our grievances

I SUPPORT TEMBA MLISWA'S ADVICE TO HONORABLE VICE PRESIDENT CONSTANTINO GUVHEYA CHIWENGA THAT HE SHOULD NOT USE HIS POSITION TO THREATEN PEOPLE. AS OUR LEADERS THEY SHOULD ACTUALLY LISTEN TO THE PEOPLE.

AFTER ALL, IT WAS ZANU PF WHICH INTRODUCED CHIEFS TO POLITICS. THEY SHOULD ALLOW THEM TO DIFFER WITH THEM. THAT IS DEMOCRATIC POLITICS. THEY ARE HUMAN BEINGS WHO CHOOSE TO SUPPORT A POLITICAL PARTY OF THEIR CHOICE.

Chiwenga shld respect people. Being a VP is not an Authority unto itself. Even Jesus Christ accepted critism.
Settle your family affairs first be you command respect

Well I thought vakuru ava are the ones who coined the statement 'Criminals surrounding the president'. Saka zvazoipei nhasi kana umwe munhu azviona kuti they are also surrounded by criminals🤷
It's high time leaders learn to become accountable for their actions and know that they are not immune to public criticism. Corruption is a cancer that needs to be nipped in the bud. Simpuru