Doctors, Nurses To Be Taught Patriotism 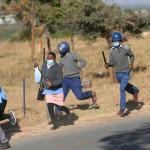 The Government has resolved to teach healthcare workers such as doctors and nurses patriotism in a bid to finally put to an end perennial strikes which disrupt the public health delivery system.

Information, Publicity and Broadcasting Services Minister Monica Mutsvangwa told journalists in Harare on Tuesday that Cabinet had approved the introduction of “the National Health Service Training and Induction Modules under the Public Service Academy.” Said Mutsvangwa:

The envisaged training programmes will, therefore, equip healthcare workers with correct standard operating procedures in the discharge of their duties, improved and efficient management skills, and patriotism that promote transparency, accountability and good governance and a high-performance work culture that goes beyond the call of duty.

Doctors and nurses have in the past staged debilitating strikes, demanding better working conditions but the Government has responded with heavy-handedness.

Last year, Vice President Constantino Chiwenga who doubles as Health and Child Care minister decreed that doctors must be recruited as military officers for them to work in public hospitals.

The country’s constitution does not allow members of the security forces to engage in collective bargaining or to join unions.

Patriotism is foisted upon people, it's something taken willingly due to natural love of your motherland