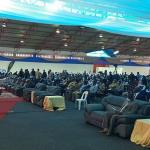 Several church leaders presumed to be sympathetic to ZANU PF on Sunday said that disputed elections are bad as they polarise the nation.

The clerics were speaking at an annual national thanksgiving and dedication service held at the Zimbabwe International Trade Fair (ZITF) in Bulawayo.

The event was held under the theme “Pursuing Nation Building Initiatives in the Spirit of Godly Patriotism Ownership Unity and Inclusiveness”, and President Emmerson Mnangagwa was in attendance.

The leader of the Zion Christian Church (ZCC) Nehemiah Mutendi said there is a need for national unity as it was also the late Vice President Joshua Nkomo’s last wish. Said Mutendi:

Let us all work to achieve peace now, let us find peace with each other. Disputed elections divide our beloved nation.

They derail our development plans, they hinder our progress, there are no winners, we are all losers.

Let us teach the people, let us be one, let us unite. It was the last wish of Joshua Nkomo (late Vice-President).

Pentecostal Assemblies Church of Zimbabwe bishop, Trevor Manhanga, mocked the opposition MDC for several splits that have dogged the party since its formation in 1999.

There are a lot of opposition parties. The MDC has finished all alphabetical names.

There is only one leader, sit down and follow. Your Excellency, you are making a mistake by giving the opposition parties cars.

Next election there will be no opposition party because they are all coming for cars.

Mnangagwa came under heavy criticism for handing out 19 Isuzu D-Max vehicles to POLAD principals in July.

CHURCH LEADERSHIP IN POLITICS NOW, YEA WHAT A SHIT.
KEEP OUT.
YOU WILL CRY KANA ZVABHENDA IPAPA

Simply put,the churches are in agreement that elections are stolen in Zim although they support the alleged perpetrator 🤔🤔

Why do things that cause them to be disputed. Fair and square game if you are sincere otherwise no need for "erections" in Zim.