Diasporan Gives Away His Wife To Neighbour 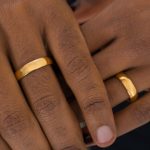 A Zimbabwean man based in South Africa surrendered his wife to a villager who had admitted to impregnating her after he had gone to the neighbouring country seeking greener pastures.

Adam Madzishe and Cecelia Nyausuro married last year in October and only stayed together for five days before the former went to South Africa.

It was during Madzishe’s absence that Shereni Nyakamene and Nyausoro started their illicit affair resulting in the pregnancy.

The matter was brought before Acting Chief Saunyama’s court which fined Nyakateme four cattle for defiling his area and failing to respect the marriage institution.

The traditional leader will take two beasts while the other two will be handed over to the aggrieved husband.

Initially, Madzishe told the court that he still loved his wife despite her having a child out of wedlock, only to change his mind before the court.

Meanwhile, Nyakamene admitted to being the father of Nyausuro’s newly-born child.

Acting Chief Saunyama said Madzishe had been in South Africa for some time but returned home in October this year and decided to take his wife to SA. Added the chief:

After processing all the paperwork, the couple proceeded to South Africa where all hell broke loose.

Nyausuro delivered a bouncing baby there and Madzishe quizzed her over this.

Considering the period he had been absent, he realised that the baby belonged to someone else.

He quizzed his wife about the issue, but she failed to give him a satisfactory explanation.

Nyausuro later confessed before the court that Nyakamene was the father of her child.

A song by Alan Jackson sings:
"Cowboys don't cry, heros don't die
Good always wins again and again
And love is the sweet dream that always come true.
Oh if life were like the movies I'd never be blue
But here in the real world
It's not that easy at all
Coz when hearts get broken it's real tears that fall."