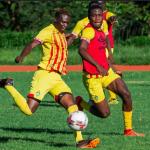 Ngezi Platinum Stars playmaker Denver Mukamba has been included in the Warriors provisional 40-member squad scheduled to participate at the 2021 Africa Cup of Nations Finals in Cameroon next month.

Mukamba, who once wore the squad’s armband back in 2012, was being ignored by coaches as his career went off the rails due to alcohol and drug abuse.

Mukamba was last called into the Warriors by axed Croatian gaffer Zdravko Logarusic when the team played in the Chan finals also held in Cameroon early this year.

The 2012 Soccer Star of the Year was a late addition to the squad but he and Ngezi Platinum teammate Wellington Taderera were dropped for the final two group games after an alleged fall-out with Logarusic.

Current Warriors coach Norman Mapeza, who has failed to win a single game in four World Cup qualifying assignments, has also been turning a blind eye to one of the best play-makers around.

Football analysts say with Kaizer Chiefs forward Khama Billiat, retiring from international duty and Ovidy Karuru inactive for the better part of the year, it is Mukamba who could be entrusted with play-making responsibilities in Cameroon.

Of the 40 players who have been called into the squad, already Brendan Galloway and Marshal Munetsi, have been ruled out due to injuries while the country. Fears abound that Marvelous Nakamba will not make it after sustaining an injury recently.

This time Zimbabwe is going to the knockout stages of the last 16. If they fail i will quit supporting them