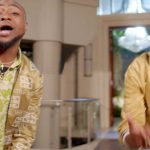 Multi-award-winning Nigerian musician, Davido, has pocketed over US$400 000 after asking his fans to send him money as an appreciation for his hit songs.

In a tweet, the global music star asked his fans to send him money attaching his banking details. He said:

In less than 24 hours Davido had raised over N100 million starting a #showmeyourfriends challenge that is now trending on social media with music duo PSquare joining.

He went on to urge his fans to keep sending money adding that his aim is to raise N100 million to clear his brand new Rolls Royce at the port. He said:

In an update posted around 1700hours on his Twitter account, he claimed that he had pocketed over N174 million.

I thought it was for charity he is so selfish

They are millions of orphans out their ,go and help them

Idiots ,sending money for somebody to clear his rolls royce at the airport God forbid,it's a scam

What is a scam??? he is their hero..none was forced to donate buh it's his fans...

Good evening to you ALL

Thus a good initiative. Will ask our Finance Department to try to raise some funds to argument our campaign chest.

Thus great ,lt shows unity of purpose.l just wish people would do the same when they see posts about orphans in need of urgent surgery or organ transplant.