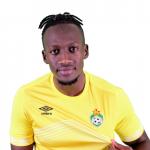 Hamilton Academical striker David Moyo says he is hopeful of earning a place in Zimbabwe’s Africa Cup of Nations (AFCON) squad but knows that he will have to perform at club level to do so.

Moyo has been named in a handful of squads for the Warriors and has one cap to date and understands his participation at AFCON is by no means guaranteed. He said:

Of course, the Africa Cup of Nations is a target. Everyone wants to represent their country.

But I just want to score some goals right now and get climbing the table.

We’ll see what happens with it. We’ll play it by ear.

Zimbabwe ranked as the 118th nation in FIFA’s world rankings have qualified for AFCON, which kicks off in January in Cameroon.

The Warriors will face west African powerhouses Senegal and Guinea, as well as central African minnows Malawi in the group stages.

Meanwhile, Moyo’s Hamilton are currently eighth in the Championship, following their relegations ahead of this season.

Moyo has netted once in 12 matches so far this season and he’s missed some games through injury.

Of all the teams,he is struggling at Hamilton academical..he is a non-striker