Darikwa Has Pulled Out Of AFCON Finals 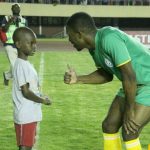 Warriors defender and Wigan Athletic captain, Tendayi Darikwa, has pulled out of the Warriors provisional squad for the Africa Cup of Nations after excusing himself for personal reasons.

Darikwa was among the 40 players provisional list that was registered with the Confederation of African Football (CAF) in November but he has excused himself once again.

General Manager for national teams Wellington Mpandare confirmed that Darikwa is out of the AFCON Finals which begins in Cameroon early next month. He said:

I spoke to Darikwa and he asked to be excused for the Africa Cup of Nations because he still has personal issues to solve back in England which needs his attention.

Marshal Munetsi and Brandon Galloway are out through injury while Khama Billiat retired from international football.

There is however a ray of hope as Bournemouth defender Jordan Zemura has started training after recovering from an injury that made him doubtful for the continental tournament.

Meanwhile, ZIFA has reappointed Mapeza as the Warriors head coach following the expiry of his short term contract.

Here in Zimbabwe we have good supporters vho like football. But there is no good footballers anymore. The time has passed where we used to see guys like the Ndundumas,mandigoras etc. Those where footballers. Not the recent ones they just only want money. And they are not proud of their country. They prefer to play for countries which are not theirs. Shame.

These people are not proud Zimbabweans,They are also being paid nuts